And I’ve always lived like this, keeping a comfortable distance. And up until now I have sworn to myself that I’m content with loneliness. Because none of it was ever worth the risk.- “The Only Exception,” Paramore

The idea of a soul mate is one I’ve grappled with since The Ex and I split. Feels like a lifetime ago… That’s probably a healthy thing, though.

Anyway, I completely thought The Ex was my soul mate. That I would never find anyone I could love as much, have as much fun with, be as sexually fulfilled with. She brought me hope in a time when I had given up on getting out of the hole I was in. She showed me happiness in a time when I thought I’d never feel it again. Our first few months were a whirlwind – trips and concerts and meeting friends and family. Once that faded, once she moved in and I had a daily family… well of course it wasn’t the same, but I thought that’s what I wanted. The Ex was the first girl I knew I wanted to marry. Or at least spend my life with. Then we became two different people, grew apart, anger turned into resentment, which turned into hatred. And now the person I thought I couldn’t live without has been evacuated from my life, nearly without a trace of what once was. 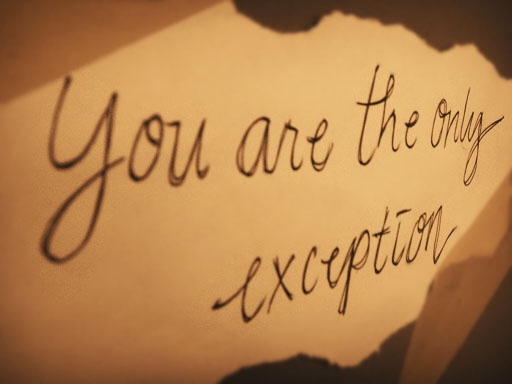 The problem is this – our souls touched. Grabbed onto each other and changed each other’s world. She was in a relationship with The Kid’s Bio-Mom, and she had decided to settle there and take care of her kid. I was in a long-term relationship with my business partner and had the financial responsibilities to go with a failing business. Ours was an unlikely pairing; one that on paper wouldn’t work. But she shook me to my core, and I did her. We left the relationships and situations we were in and ran off together, so to speak, to start over. We supported each other, needed each other. We told each other that daily. First encounters became sessions of give and take, letting go and trusting each other. Our connection was powerful, and sex soon became making love – a feeling I had never experienced before. Or since. There was a desperate need for each other, and those feelings made it so easy to convince myself that this was right, this was it, that walking away from what I had before was easy. And during our honeymoon phase, it was. But that doesn’t last. The lovey-dovey feelings don’t last. How people can base entire relationships on those feelings I’ll never know, because I felt firsthand what its like to have them crash all around you and see what kind of relationship you truly have.

I never questioned that she and I were made for each other. That there was one person for me and she was it. What I didn’t know is that she had felt that 10 times before, and did again before she left me for someone else. It made me question everything – is there only “one”? Can it be possible, in this giant world of ours, for you to really be meant for only one other person? Do you know how incredibly improbable that would be to meet them? So then what is a soul mate?

Maybe I know somewhere, deep in my soul, that love never lasts. And we’ve got to find other ways to make it alone, but keep a straight face.

Attraction IS common. We can be drawn to people, even connect with them, on many different levels. Ask Farm Girl, who says she can connect with just about anyone through deep conversation. So what’s different about a soul mate, a partner? As my life continues to change, going from one relationship to another for basically ten years, to being single, to trying to date while balancing work, to focusing on myself and my writing and mastering self-love, I’m seeing that having a partner who wants to grow with me and help me grow is paramount. Right now getting my house in order is important, and the closer I get to doing that, to really figuring myself out and loving myself for all that I am, the more I see how a true partner would help with that, encourage that, enhance that. And I would want to do the same for them. To truly build a life together.

Is there just one? Who knows. I don’t think so, but then you haters will just say I haven’t met the right one yet… The same kind of argument the church gives to why I’m gay – I just haven’t met the right guy… There’s too much pressure on me and them for there to only be one. What a burden! But a soul mate… That kind of connection can happen with someone I invest in, someone I connect with on many different levels, someone I choose and chooses me. A partner, a confidante. One who betters me and I them. That’s a powerful thing. Will I find it? Do I even want it?  Who knows.

Just your friendly, neighborhood writer trying to navigate the dating world as an adult. Check out my adventures in bars, schools, nicknames, jobs, and more. View all posts by mecubi